Hello, August! Let’s get to know this month’s birthstone: 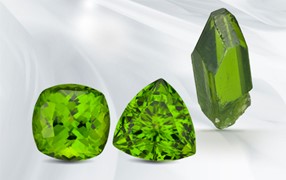 The Ancient Egyptians called peridots “Gems of the Sun.” Since long ago, peridot has been associated with light, and various cultures wore it to ward against evil spirits.

Peridot is among the few gems that exist in only one color – its recognizable bright olive green. By comparison, September’s sapphire comes in many colors of the rainbow, and June’s pearl can carry multiple hues in the same pearl. 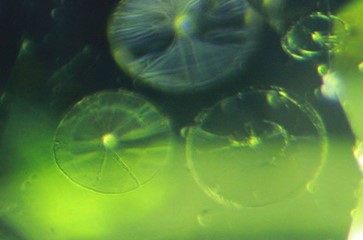 While peridot is a mostly transparent gemstone, its inclusions can sometimes carry a signature appearance: the lily pad inclusions are a tell-tale sign that a green gemstone is a peridot.

Close up photography of the signature lily pad shaped inclusions inside a peridot.

Edward VII of England, after whom the Edwardian era was named, declared that peridot was his favorite gemstone.

Peridot is found in many meteors, having quite literally flew in from outer space. Peridot was also among the many findings in a NASA sample gathered near the sun, suggesting it being as old as our solar system.

Peridot is birthed through volcanic activities and can be found all over the world, including the USA, Kenya, Tanzania, South Africa, Pakistan, Myanmar, China, Norway, Australia and more.

Peridot and diamond ring. 30+ carat peridot embraced by diamonds and set in Crownwork™. One of a kind design by Ray Griffiths. C&R Heritage Collection. 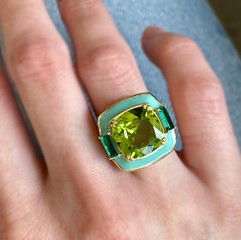 Peridot and emerald ring with enamel, by Ray Griffiths. 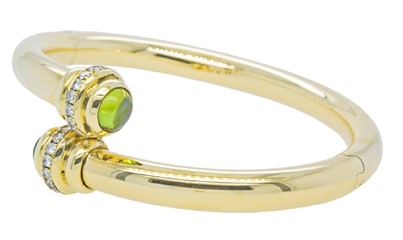 Peridot and diamond bangle by Manart. 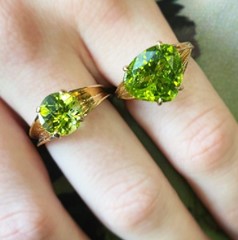 Peridot is available in a wide range of quality and prices, because it comes in many shapes and sizes, and it pairs well with other color gemstones. There is a plethora of designs to choose from for a peridot lover. It is important to seek information and purchase from people with reputable credentials and ethical sources.